What We're Doing on Campus

We work together to continually develop and implement sustainable solutions. Through Green Thread, our environmental sustainability platform, we bring innovative and efficient solutions to life. We are passionately focused on reducing the environmental impact within our operations.

Here are just a few ways we work to make our campus more environmentally conscious:

Aramark Dining Services and Physical Facilities on Campus Recycling and Special Services department collaborated in starting a food scrap composting program in August of 2017 at Robertson Dining Hall (Rob’s), the largest food service production facility on campus.  Since starting the program; 276,170 pounds of organic waste was collected through December 2020..  Without the efforts of this partnership this waste would have been landfilled and ultimately contributed to the production of methane, a greenhouse gas. 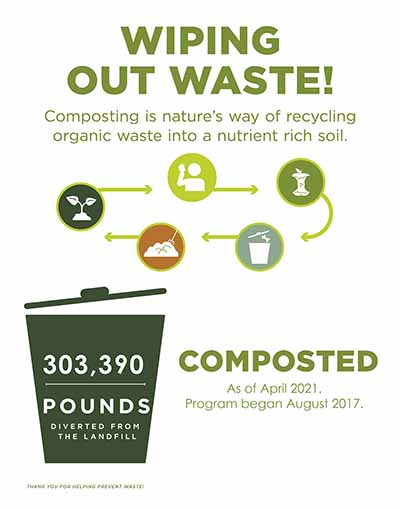 How the composting program works: The organic waste is comprised mostly of food trimmings such as melon or pineapple skins and unusable vegetable trimmings that are the result of recipe production.  These scraps are weighed and photographed by the cooks using a scale and touchscreen interface.  This process not only tracks the weight volume, it enables the Chef and management team to have full visibility into the kitchen’s food waste stream allowing strategic adjustments to be made to food prep and production.  The food scraps are then collected and used to create compost which is utilized on campus in the ornamental flower beds.

In addition to the composting collaboration a significant investment of capital by Aramark into Rob’s Dining Hall for equipment, including a new dish washing machine, was made in 2016.  This enabled the dining hall to consistently utilize re-usable service ware rather than using disposable plates, bowls and eating utensils that went into the trash stream after use.   The result of the equipment investment, composting partnership and the Aramark food prep and production process is a reduction of landfill waste from 230,120 pounds to just over 17,000 pounds annually.

The success of the program is truly a collaborative effort from both PFOC and Dining Services in which all stakeholders were totally committed to the program’s success. Both departments are very proud of the accomplishment and are enthusiastic about expanding landfill diversion on campus.

Andrew Henry, Director of Building Services, Recycling, Grounds, Special Services, Parking and Athletic Maintenance says: “Rob’s has quickly become a campus leader in waste reduction.  The program’s success, up to this point, is the product of complete ‘buy-in’ and an extreme amount of patience from its stakeholders.  We’ve also used the food scrap recycling program and recommitment to waste reduction as a means to encourage students to be more cognizant of their waste.”

The program was expanded to the Jean Hower Taber Student Union during the Fall 2019 semester.

Did you know that Dining Services sources food from many local farmers, growers, and distributors?   This list changes throughout the year depending on seasonality and availability.  However, here’s a sampling of a few of our partners:

Dining Services recycles from all dining locations across campus. We are committed to minimizing our environmental footprint. Look for signs in our locations for information on where to put your recyclables.

Reusable mugs are available for purchase at Union Market and Zee’s convenience stores for $3.99 and include $.99 refills on coffee and fountain beverages. Choose to Reuse!